Sponsor: TEXAS COMMISSION ON THE ARTS

Once described as “Dr. Doolittle, Bruce Springsteen, and Robin Williams all rolled up in one,” Lucas performs for over 80,000 children annually at schools, libraries, and family events throughout the nation. He delights children and parents alike with his dynamic stage presence and songs like “The Anaconda La Bamba,” “A Snake’s NOT Slimy” and “Gotta Take Care of the Hive.”

Lucas holds a degree in zoology and underneath all the silliness is good, solid science education. “First and foremost,” he said, “I consider myself an environmental educator. I try to help kids realize how much we depend on the natural world.”

Lucas has authored two children’s books, released three, award-winning CD’s, and hosts the award-winning DVD series “Animals Rock with Lucas Miller.” With song titles like “I Don’t Wanna Be Part of the Food Chain” and production styles ranging from bluegrass to rap, Lucas’ music has an appeal beyond the Nickelodeon crowd. “People often tell me that my songs don’t sound like the children’s music they’re used to hearing,” Lucas says, “A lot of parents have actually told me that they enjoy the songs as much as their kids do.”

Lucas has been a full-time, independent educator since 1994. Based in Austin, Texas, he has performed for the National Zoo, Austin City Limits Music Festival, Moody Gardens, Whooping Crane Festival and hundreds of schools and libraries across the continent.
.

SCIENCEFEST is a novel, creative way to promote STEAM (Science, Technology, Engineering, Art and Math) Exhibitions. Demonstrations are an opportunity to get young and old alike involved in doing science together through imaginative STEAM projects.

The fun and excitement of science will be brought to life through hands-on, interactive exhibits, science-themed performances and demonstrations, and family-oriented science entertainment,
interactive, hands-on, activities 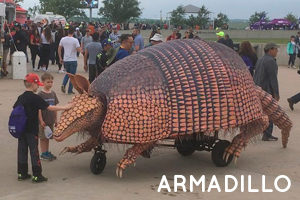